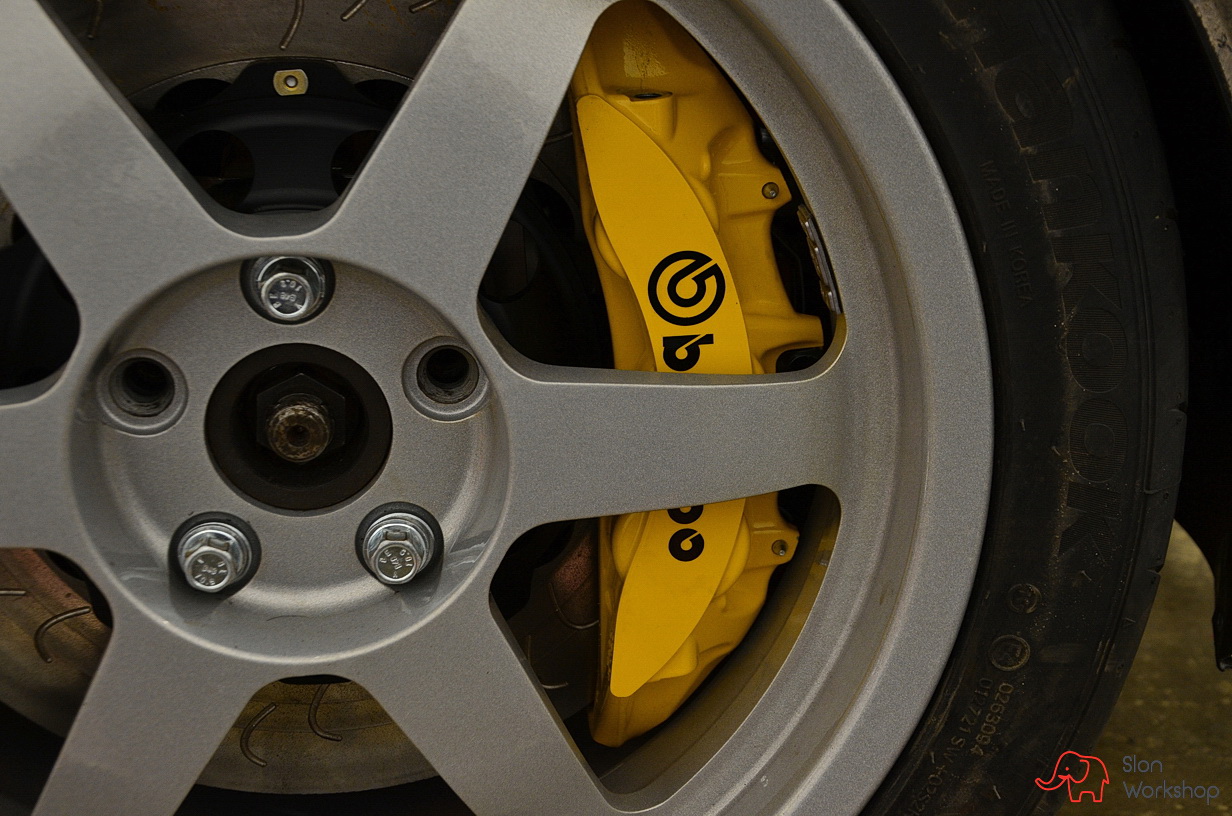 We had a very interesting task — to square the circle.

It was necessary to install customized six-pot calipers Brembo and brake rotors 355 mm into 17’’ car wheels.

This brake system was developed for Opel Astra mk4 tracktool

In addition to the fact that, in principle, every component of this brake system was reworked by reducing greatly the weight, during the designing we understood that it would not be easy to finish the work, so we had shifted the rotor as deep as possible.

We have reduced rotor height from 67.5 mm (factory dimensions) to 42 mm. This became possible due to the huge and narrow rotor (50 mm working surface), in comparison with the drain — the ball joint was partially inside the rotor).

We did not want just to make it thicker by means of wheel spacers as there were other components apart from the brake rotor, and if wheel projected out there would be additional problems with placing the wheels into the arches.

Therefore, I decided to use minimum spacer — 4mm. Because in this case it was not a temporary option, it was precisely measured, so I put it directly into the rotor bell to adjust excess weight. The spacer was replaced by plates on the bell around the holes of the wheel bolts, just in the form of casting on wheels.

In total the rotor bell weight was 700 g instead of 1.3 kg, similar to the rotor bell of the same height without lighting and a separate wheel spacer.

Wheel disсs were chosen not without reason, these were wheel discs produced by “Aviatechnology” company, Time Attack model, which had a large inner space for caliper, this gave us hope for a success.

After we have customized (machined) 355 mm brake rotors at CNC machine with a large ventilation (channel width was 17 mm) for the purpose to fit it to T-bobbins, remade greatly lightweight rotor bells, made our new six-pot Brembo calipers from lug mount caliper to radial mount caliper, made light adapters to fit calipers,..

we have done a fit check on the wheel and found out that caliper was perfectly adjusted to brake pad (pad edge was at 1 mm from the rotor outer edge) only when it completely entered in diameter (was firmly settled) to the wheel disc.

In general, it was not so sad, because the caliper was already inside the wheel :D.

To be happy we needed to find another 3-4 mm for a minimally safe gap in the nearest points, between the caliper and the wheel disc rim.

Now, the simplest thing to do is to fit on the support body. We have drawn the profile of our wheel disc rim and made a cutout on the 3D model of the caliper, for the further rework on the machine.

The process of machining: 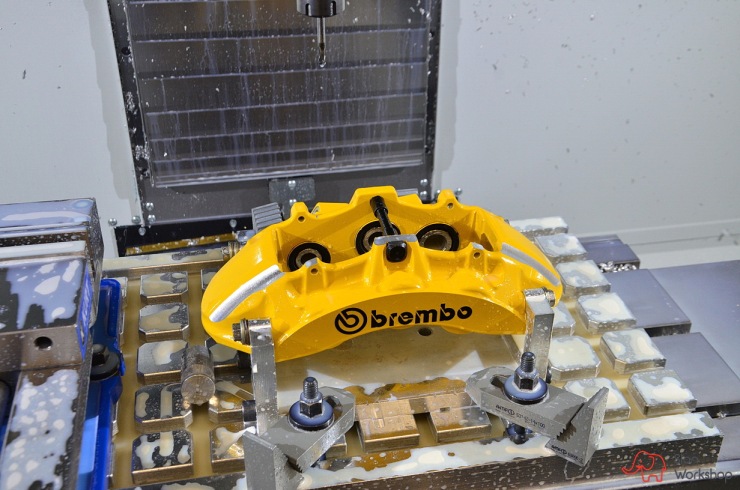 After one fit check we have adjusted the cutout diameter and it was done:).

We took a photo, when the second caliper was being machined.

The photo looks pretty scary, actually there was a projection on the caliper, we just slightly reworked its shape — on the largest protrusions we have filed off up to 3 mm; on average, we have filled off only 1-2 mm of an access metal. But since the shape was perfectly fitted to the inner space of the wheel disc, we received the necessary gap over the entire surface of the caliper. 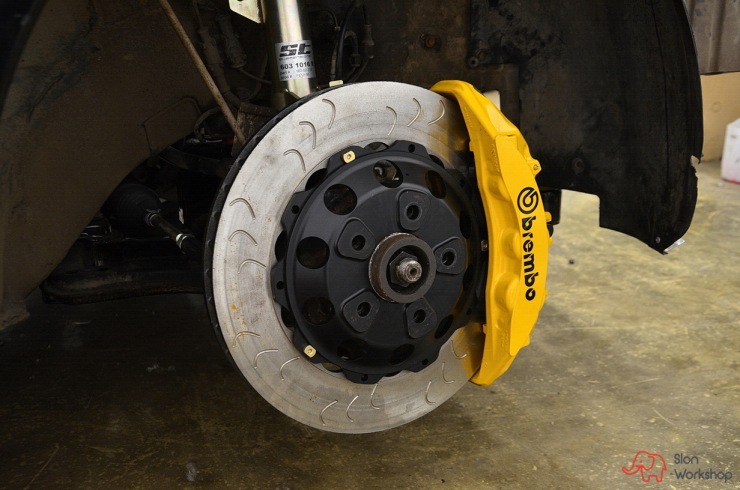 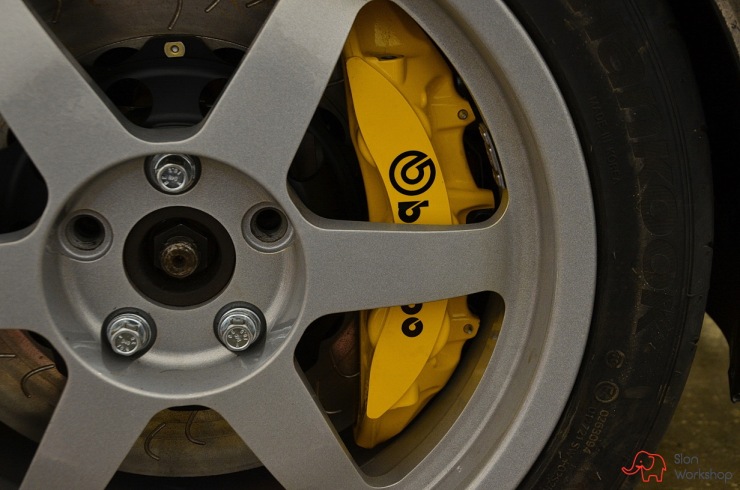 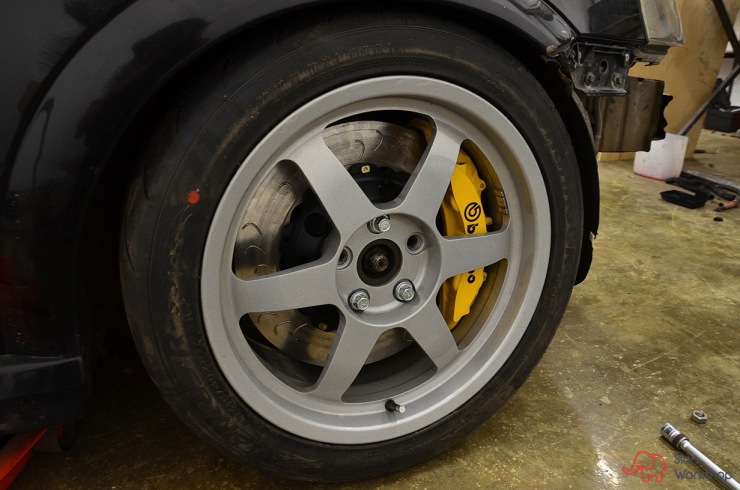 The caliper fitted perfectly — the brake pad was in 1 mm from the outer edge of the caliper, the caliper itself was aligned with respect to rotor, and the gap… The gap between the caliper and the wheel disk was exactly the same everywhere, 3-4 mm). In fact, it was very unusual to see when the caliper shape followed perfectly the shape of the wheel both in diameter and in the rim shape.